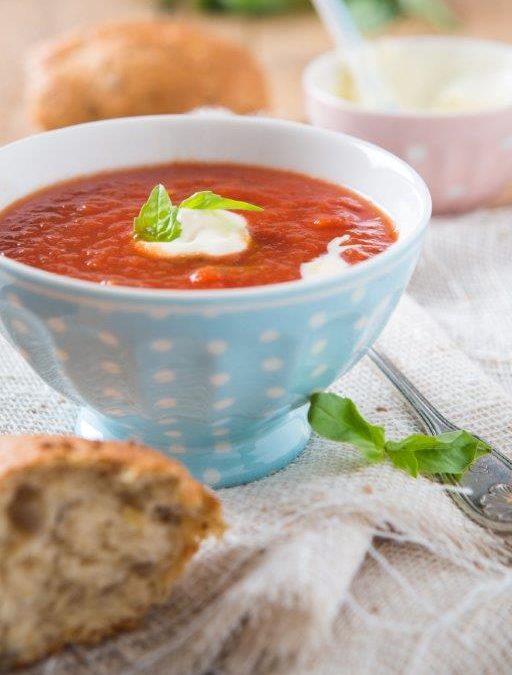 Cozy up with warm foods

As the temperature drops, don’t be tempted to warm your belly with rich macaroni and cheese and creamy soup. Instead, get that toasty feeling from superfoods: healthy eats that are loaded with nutrients, antioxidants, and immune-boosting powers that your body needs to power itself through cold weather. Read on to find the best hot foods to eat on chilly days and a few healthy tidbits to prepare them for ultimate nutrition.

When it gets cooler, it’s the perfect time to break out the oatmeal. Oats are a whole grain, so you’ll get a dose of fiber and plant-based protein to stop hunger with just one bowl. Plus, oatmeal contains a powerful starch called beta-glucan. Research in Nutrition Reviews found that just 3 grams a day of the beta-glucan in oats may reduce your bad cholesterol levels by 5 to 10%, whether they start out normal or high. You can get extra nutrition if you choose the right toppings too. “To get some healthy fat mixed in, I add almond butter and chia seeds,” says Keri Gans, RD, a dietitian in New York City and author of The Small Change Diet.

Curling up with a cup of hot cocoa is one way to feel snug—just nix the sugary powdered mix with marshmallow bits. “When I make it, I like to melt two squares of dark chocolate and stir it into regular or almond milk,” says Cynthia Sass, MPH, RD, Health‘s contributing nutrition editor. Adding a little dark chocolate to your diet is a great health booster too. The sweet contains flavonoids, a type of antioxidant thought to reduce the damage caused by free radicals, potential instigators of cancer and cardiovascular disease. A study in the Journal of Immunology Research found that red blood cells were less susceptible to free radicals after people consumed a drink with flavonoid-rich cocoa.

There’s nothing like a soup with cumin and chili pepper to heat you up when things get cold. The nutrition star of this dish, though, is the beans. Black beans are a good source of iron and copper. So sipping on this soup will help your muscles use more oxygen and boost your immune system, Gans says. A typical serving of soup would include nearly a cup of black beans, which provides 15 grams each of protein and fiber. Unlike animal protein sources, black beans contain almost no saturated fat. Research from the American Chemical Society also shows their black skins contain higher levels of the disease-fighting antioxidants flavonoids than any other type of bean.

Eating these mini cabbages may just help you fight a cold this fall. In addition to being packed with fiber and cancer-fighting phytonutrients, Brussels sprouts run high in vitamin C at 74.8 milligrams a cup. It won’t prevent the sniffles completely, but vitamin C has been shown to reduce the length of cold symptoms. Though the bitter taste of Brussels sprouts tends to scare some people away, heating them up can make a huge difference in flavor. “I would roast them with olive oil,” Gans says. That will help bring out the sweetness. (You can make these 12 other veggies taste better too.)

Try this recipe:Sautéed Brussels Sprouts with Parmesan and Pine Nuts

If you’re lacking vitamin A, the nutrient critical for promoting vision, a dose of pumpkin will do you good, Gans says. Most adult women should be getting 700 micrograms a day, according to the National Institutes of Health. In a serving of soup, you would use a third to a half cup of pumpkin puree, Gans says. So you could be getting more than a day’s worth of this vitamin in most recipes. Be mindful of a recipe with cream, though, if you’re looking to cut back on calories. Pumpkin also has antioxidant properties thanks to beta-carotene, Gans says. It’s a pigment usually found in bright-colored produce, and it’s thought to have cancer-fighting powers. A study in Anticancer Research treated human breast cells using carotenoids, including beta-carotene and lycopene, and found they can prevent their growth.

The peppers in your stew contain a compound called capsaicin, which gives them their spicy kick. It’s also thought to boost metabolism and fight the buildup of fat. When paired with a high-fat diet, capsaicin was found to decrease body weight by 8%, according to an animal study conducted by Korean researchers. No matter the variety, the beans in chili also pack protein to help you build muscle. That’s not all. Tomato paste is rich in lycopene, and the onions provide unique antioxidants, Sass says. Think about cutting back on the meat in your chili from time to time though. A National Institutes of Health study found that men and women who consumed the most red meat were at increased risk for death from cancer and cardiovascular disease.

There’s a way to enjoy this creamy fruit when it’s chilly. “Oven roasting avocado makes it even creamier,” Sass says. “Chop it up warm and put on top of another vegetable.” Bonus: about half of the fat of avocado comes from monounsaturated fat, which helps lower your bad cholesterol levels and provide nutrients for cells to function, according to the American Heart Association. They might also help you stay full. A study in Nutrition Journal found that eating a meal with avocado increased satisfaction by 23% over a five-hour period. Just watch your portion size: a serving is just one-fifth of an avocado.Try this recipe: Chilled Avocado Soup

Walnuts are good any time of year, but they make a lovely roasted snack in the fall. “Walnuts toast awesome on a cookie sheet at 350 degrees for 5 minutes,” Sass says. Lightly misting with oil and adding seasonings like pepper can up the flavor in a healthy way. Even better, walnuts are rich in alpha-linolenic acid (ALA), one omega-3 fat thought to boost heart health. In the Journal of the American College of Nutrition, a study found that people who ate a diet of walnuts, walnut oil, and flax oil had reduced resting blood pressure and blood flow resistance in their arteries than those who ate a diet lower in ALA.

Baked apples make the perfect sweet treat for fall. The fruit packs soluble and insoluble fiber. One slows digestion and the other helps food pass through your system more smoothly. That means less hunger and tummy troubles. Just make sure you leave the skins on—they’re a more concentrated source of fiber than the flesh, says Melissa Rifkin, RD, a bariatric dietitian at Montefiore Medical Center in New York City. An unpeeled medium-sized apple contains 4.4 grams of fiber. “If you sprinkle some cinnamon on top you get more antioxidants,” Rifkin says. Plus, apples are made up of nearly 86% water, so munching on the fruit will help you stay hydrated as you bundle up.

Like pumpkin, sweet potatoes are particularly high in vitamin A. One baked, medium-sized spud contains 438% of your daily value. Plus, you’ll get nearly 4 grams of fiber—mostly found in the skin—to fill your tummy. Sweet potatoes are also rich in vitamin C, calcium, potassium, and a bit of iron. “If you bake the sweet potato by itself, it’s generally a low-calorie food,” Rifkin says. Just try to avoid slathering fatty butter or margarine on top. A better bet: rosemary. It has B vitamins and cancer-fighting phytochemicals, Rifkin says. The compounds are thought to block carcinogens from acting on your body’s tissues, according to the American Cancer Society. Bonus: a little rosemary will give your sweet potatoes amazing flavor.Try this recipe: Twice-Baked Sweet Potatoes With Bacon and Sour Cream

In addition to having some calcium and vitamin C, most varieties of squash are high in potassium. A study in the Journal of the American College of Cardiology found a diet high in potassium (while also curbing sodium) could reduce risk of stroke by 21% and lower odds of developing heart disease. Squash is also rich in vitamin A and contains hunger-busting fiber. Take one of Rifkin’s favorites, butternut squash. A cup of baked cubes has 457% of your daily vitamin A, 7 grams of fiber, and just 82 calories. Even better, you can warm up all its parts. Bake the insides and season with garlic salt, pepper, even cumin or turmeric, Rifkin suggests. “You could also take out the seeds and bake them like pumpkin seeds,” Rifkin says.

If you’re thinking of reaching for a cup of tea, opt for a brew with ginger. “Ginger has thermogenic properties that can keep you warm,” Rifkin says. Because of its heating powers, ginger may also boost metabolism and promote blood flow. A study in Metabolism had one group of men consume 2 grams of ginger powder in a hot drink with their breakfast. Researchers found the men who drank the ginger beverage reported less hunger and greater fullness a few hours later than those who didn’t consume the ginger. Adding the spice to your tea could also help relieve body aches, like the ones you get after an intense workout. In a study for the International Journal of Preventative Medicine, one group of female athletes took three grams of ginger daily and reported less muscle soreness after six weeks than those who didn’t receive ginger.